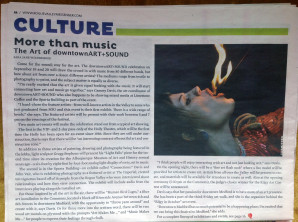 Come for the sound; stay for the art. The downtownART+SOUND celebration on September 19 and 20 will draw the crowd in with music from 80 different bands, but how about art from over a dozen different artists? The mediums range from textile to photography to paint, and the subject matter is equally as diverse.

“I’m really excited that the art is given equal booking with the music. It will start connecting how art and music go together,” says Cammy Davis, the art coordinator of downtownART+SOUND who also happens to be showing mixed media at Limestone Coffee and the Sparta Building as part of the event.

“I hand-chose the feature artists—from well-known artists in the Valley to some who just graduated from SOU and this event is their first exhibit. There is a wide range of levels,” she says. The featured artists will be present with their work between 5 and 7 pm on the evenings of the festival.

Two main art events will make the celebration stand out from a typical art showing.

The first is the VIP- and 2-day pass-only of the Holly Theatre, which will be the first time the Holly has been open for an event since 1986. Since they are still under construction, Davis says that there will be “an interesting contrast of beautiful art and construction zone.”

In addition to three artists of painting, drawing and photography being featured in the lobby, light sculptor Gregg Stephens will present his “Light Falls” piece for the second time since its creation for the Albuquerque Museum of Art and History several years ago—a six-foot by eight-foot by four-foot analog light display of sorts, set to music.

The second is in the Sparta Building—an exhibit called “Connections.” Davis and John Vait, who is exhibiting photography as a featured artist at The Imperial, created ten vignettes based off of 16 people from the Rogue Valley who were interviewed about relationships and how they view connection. The exhibit will include audio from the interviews playing alongside installed art.

For those inspired by all the art in the air, there will be “Human Bird Cages,” a fiber art installation in the Commons, located a block off Riverside Avenue between 4th and 6th Streets in downtown Medford, with the opportunity to “throw yarn around” and create with it, says Davis. Or for those more into the written word, there will be two wood art murals on plywood with the prompts “Art Makes Me …” and “Music Makes Me …” for people to express their feelings through chalk.

“I think people will enjoy interacting with art and not just looking at it,” says Davis.

On the opening night, there will be a “fine art flash mob” where a live model will be provided for artists to create art. Artists from all over the Valley will be present to create, and materials will be available for attendees to create as well. Also at the opening ceremony (5:30 pm at the Commons), the judge’s choice winner for the Edgy Art Contest will be announced.

Davis says that her passion for downtown Medford is to have more of an art presence. She has been a part of the third-Friday art walk, and she is the organizer behind the “Edgy in October” art event.

“Downtown Medford has so much potential to be a happening place; I’m excited that we can bring this festival to Medford,” she adds.