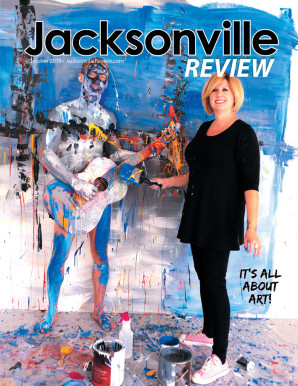 ART is Everywhere in Jacksonville! – by Hannah West

Have you noticed an uptick in our local art scene? From formal galleries to coffee shop displays and more, art is everywhere in Jacksonville.

CAMMY DAVIS—Artist and art advocate Cammy Davis, creator of the Jacksonville Review town map, is one of the artists in the community helping make the arts scene more vibrant. Cammy, a Jacksonville resident, has been the primary caregiver of her 98-year-old grandmother since she moved from Seattle to Jacksonville four years ago. This winter, feeling that the stress of her family life was taking a toll on her art, Cammy turned to music, as she had done most of her life.

While interviewing a musician on her local radio show “Art on the Airwaves,” (KSKQ 89.5FM) Davis suddenly thought, why not combine the two in video and show how music impacts her art. Determined, she went to the Oregon Coast, where she grew up, accompanied by a giant canvas. After setting-up easel and video camera, she listened to local musician Jeff Kloetzel’s rendition of “Come Back to Me” (Faceboook/jeffkloetzelmusic) while painting all day, and her creative tide began to turn. Davis’ first paragliding experience in the skies above the Applegate Valley also encouraged a rising tide; combining the footage, she made a video using music by another local artist, Martin Ball, “Letting Go.”

One of Cammy’s friends, Jacksonville metal artist Cheryl Garcia, suggested asking Kloetzel to record the theme song for her radio show. He did, and Cammy invited him to make a video. He accepted. Jez Kline came up with the concept and award-winning Seattle photographer Teri Harris was the videographer. Jez wanted Cammy to paint Jeff into a large canvas, so she recreated her “Come Back to Me” painting on plywood while Kloetzel sang, until musician and guitar dripped with paint. After the shoot Teri captured one still, the image seen on this month’s cover. Once the video is completed in November, you can view it at cammydavis.com.

Back at creative high tide, Cammy has a solo exhibition this month at J. Pepin Art Gallery in Portland. You can watch “Letting Go” and listen to her radio show podcasts at artontheairwaves.com. Her new line of jewelry is available online at cammyart.com and locally at WillowCreek Gifts and The Crown Jewel.